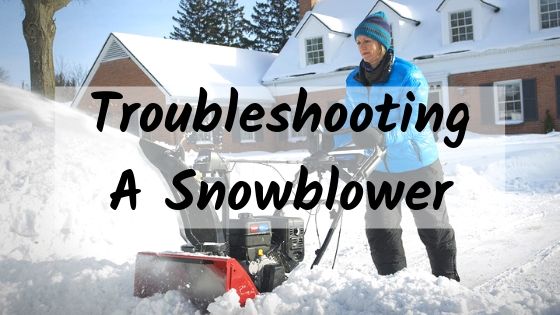 Is your snowblower refusing to throw snow? This tutorial will be your guide for How To Troubleshoot A Clogged Snowblower.

A single stage snowblower can be prone to clog when snow gets packed in the housing. As the auger spins around, a layer of snow could be slipping between the paddles and causing the housing to clog up. Here are a few tips to prevent your snowblower from getting clogged.

This is the number one reason why single stage snowblowers get clogged. The condition of your snowblowers scraper blades, rubber paddles, and belts directly translate to its performance of throwing snow.

A snowblowers augers operates with a tight clearance between the paddles and the housing. The small gap ensures the snow is scooped and thrown out of the chute efficiently.

As paddles wear down, the gap gets bigger and makes it to where more snow is getting into the housing, and not going out the chute. Some paddles have a wear marker to make it easier for someone to tell if the paddles are wearing down or not.

The scraper blade forms a protective edge where the underside of the snowblower housing meets the ground. It helps shovel snow off the ground and up into the auger. A worn or missing scraper blade will increase the clearance between the auger and the housing and make clogging more likely to happen. It can also create a coarser pass over the ground and leave more un-thrown snow behind.

All snowblowers have a maximum capacity that should NOT be exceeded or the snowblower may strain. A good tip is to check the forecast and see how much snowfall is expected within the night or week. If the forecast is calling for more snow than what your snowblower is capable of doing, is you can do multiple passes during the storm, if possible.

In general, single stage snowblowers operate best when there is about 6 inches of snow on the ground. For a larger and denser accumulation, look into using a two-stage model.